A Warm Welcome To Westport

The Great Western Green Way is a 43km cycle to Achill Island. The route starts in Westport. It was originally a single gauge railway track, built in the1890s by The Great Western Railway company. Today, it has been converted (since 2012) to a walking and cycle way offering a safe off-road experience to thousands of people holiday makers and locals every year. The project itself took the cooperation of 170+ individual owners. With great local enterprise, the Greenway has transformed the local economy, and has been the recipient of international awards of excellence.

The first section of the green way is 12km from Westport to Newport and it is a one-hour cycle. At Paddy & Nelly, we suggest this first section of the Greenway to people who just want a single two- or three-hour trip with a stop off. For families in particular, this route with the large children’s playground in Newport, is a great day out and it’s safe for kids to cycle. There are also two excellent picnic areas in Newport on the Black Oak River.

On return from Newport, for people who are open to some on road cycling (on quiet country roads and boreens) with stunning scenery over Clew Bay – we suggest turn right at sign for Buckfield Lodge. Travel down the coast road to Rosmoney Harbour and sailing club along the way to visit Castle Affy in Roscahill Bay. This castle was once owned by Grainne O’Malley – the pirate queen from the 16th century. The pirate queen was famous for her exploits on the high seas along the west coast of Ireland. Upon arriving at Rosmoney Harbour, you will see great activities. These include things to do at the sailing club, kayak hire with lessons available and Collenmore Island. The island is just a five-minute rib ride from the jetty

Returning to Westport through Carrowholly and along the golf course road. The golf club and its club house is open to visitors. From the upstairs restaurant and terrace, you are offered some of the best views in Westport. Returning in through the camp site gate of Westport House, the town can be accessed. This tour to Rosmoney adds an extra 6km, to tour a wonderful three or four hour cycle.

At Paddy & Nelly, we supply a wide range of bikes, electric bikes and kids bikes and trailers. Drop in and see us and we will advise you what route that would be best choice.  We are looking forward to seeing you at Paddy & Nelly Bike hire in Westport Town Center. We’re located at the entrance to the 400-acre estate, Westport House and Gardens. Paddy & NeIIy are voted number one for bike hire in Westport with TripAdvisor. 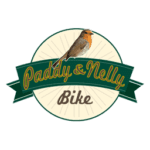 Paddy & Nelly Bike Hire
In Celtic Mythology, the robin was a symbol of birth and renewal which was celebrated on the 21st of December. This is the shortest day of light and symbolises the beginning of the New Year. 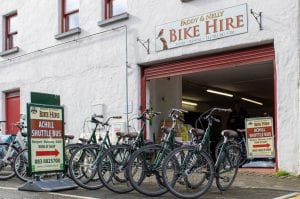